Adventures in the Middle Chute 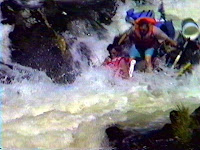 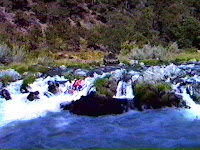 The middle chute at Rainie Falls can save a lot of work, compared with what it takes to run a big raft down the “lining chute” on the right. The first time I ever tried it was a late-season trip in a low-water year. The lining chute was so shallow that we had trouble even getting the lead boat down. I talked it over with one of my experienced guides, Don, and we decided to take the two larger rafts down the middle chute. He’d done it before, so he showed me how it was done. For the remainder of that season, I ran the heavies down the middle.

The first time I ever had any problem there, other than occasionally getting stuck on an inconveniently-placed shallow rock at the entrance to the chute, was when Rainie John took Klamath over the main drop. But we’ve had other troubles there. On an October trip in a low-water year, I was taking Cheyenne down the chute. As is typical, we were rebounding back and forth off the sides as we bounced down the three big drops. At the lip of the third drop, the raft went left and ran up onto a rock that protruded out over the water. Pinched between the rock and the stove box, the floor of the raft sustained a couple of one-inch cuts and immediately deflated. The current behind the raft kept us pushed hard onto the rock.
I worked my way down to the front of the raft, and eventually out onto the rocks, where I struggled to lift and shove the raft back into the chute. I hopped on as it broke loose and fell through the final drop. We floated the rest of the day with a deflated floor, and fixed it in our camp below Hewitt Creek.
More recently, I accompanied my daughter Tamara on her first try at running a raft down the middle chute. It was not the first time that Bright Star, a twelve-foot raft, had been through there—we had done it on a Clan trip a couple of years before. Everything went fine approaching the chute, and we dropped through cleanly. But in the swirling water below, Bright Star got stopped by the reversal. At first, the current just pushed us back against the rocks between the middle chute and the main falls. But the situation became urgent when we felt the raft being pulled toward the hole at the foot of the main drop. We did not want to go there!
I added some extra horsepower to the rowing, and was able to pull the raft away from the hole and out onto the downstream current. We have the whole thing on videotape, and it is easy to see how close we were to getting the Maytag treatment.
Posted by The Mogur of Whitewater at 12:43 PM