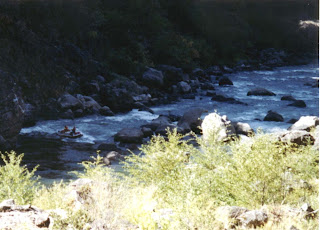 Some of my best trips down the Rogue have been in October, after the throngs of summer boaters have abandoned the river and returned to jobs and school. My first October trip was in 1986, with Judd Lucas and a couple of other fishermen. I had just bought Cheyenne, and I really, really wanted to taker her out on a river trip. We recruited two other guys from our office, and Judd even talked me into getting a fishing license—possibly the only time in my life I’ve had one. We left Newberg early in the morning and arrived at Almeda Bar at about 10:30. I didn’t yet have a trailer that would carry the rafts already set-up, so we spent the next couple of hours inflating and rigging our rafts.

I used my still relatively new aluminum frame (built for Mariah) on Cheyenne, even though it didn’t fit as well as I had hoped when I bought the raft. Judd rowed Mariah using its original wooden frame. We started down river at 1:00. At Rainie Falls a couple of hours later, we wrestled the rafts down the lining chute, and by the time we were done with that, we were ready to stop for the day. Less than a mile below Rainie, we spotted a beach on the left. Judd thought that the pool next to the beach looked like a good fishing hole, so we pulled-in and set up camp.

The next morning, Judd broke out his fishing gear and began rigging. But before he got rigged-up, another fisherman came walking down the riverbank and tossed his line into our fishing hole. Don’t fishermen have some kind of unwritten rule about butting-in on someone else’s fishing hole?

“This is one of my favorite fishing spots,” the guy told us. “A few years ago, I came down here one morning, and started fishing this hole. There was a tent on the beach, but there was nobody in sight. Well, just as I hooked into a big Chinook, I saw a hippy kind of guy—you know, long hair, beard—climb out of the tent. He stood there stark naked and complained, ‘Hey man, you’re, like, unravelling the fabric of my experience.’ Ever since then we’ve called it Experience Beach.”
Posted by The Mogur of Whitewater at 12:42 PM