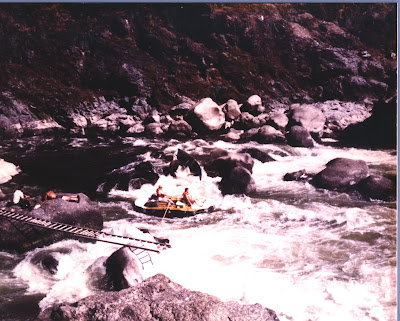 It was four more years before I went back to the Wild and Scenic section of the Rogue. That trip will always be known as The Drunk Trip. Drew Patterson and his two buddies drank huge quantities of beer, mooned the jet boats, got arrested at Indian Mary Park for doing so, and still managed to get down the river. There were three other guys along too. One rode with me, one was rowing solo on a four-man raft and the other paddled a Tahiti. I was the only one in the group who had been down the Rogue; and in fact, though Drew was an experienced paddler, I was the only one who had ever rowed a raft.

That’s one reason we launched at Shroeder Park in Grants Pass—that and simply to extend our trip. The first day was all flat water, but within two miles of the launch our trip nearly ended. We spotted a rope swing hanging from a tree that leaned way out over the river and stopped to play. We all took turns climbing the steps nailed onto the tree trunk, then swinging out high over the water and dropping into the deep pool. When Drew, already wobbly drunk, took his turn, the tether rope that is used to retrieve the main rope for the next jump, got snagged on one of the steps. Drew swung out from the tree and just as he was about to go out over the water he ran out of slack in the tether. He was yanked to a stop, let go of the rope and dropped ten feet into water about six inches deep. I thought the trip was over right there. But Drew just picked himself up and went back to try it again. He made sure he took the tether rope along that time.
In camp that evening, after a long day of power-drinking, Drew and some of the others were up on the river bank playing poker. I was down next to the river, where I watched an orange jet boat roar upriver. A rousing cheer went up from the crowd on the jet boat and I turned around to see why, just in time to see the three drunks mooning the jet boat. They told me later that they had done it earlier in the day too, when the jet boat was going the other way.
After lunch on our second day we went through Hellgate Canyon, and as had become the pattern, Drew and the Drunks were lagging behind. The jet boat from Morrison’s Lodge passed us, heading upstream. I looked back to see that they had stopped next to Drew’s raft and even from a quarter mile away I could tell there was a heated conversation going on. I waited for Drew to catch up, and asked what that was all about. He said that after they mooned the jet boat, the operator had told him every law enforcement authority in the county was looking for him and his buddies. It all sounded like hot air, but when we stopped to fill our water jugs at Indian Mary Park, the sheriff was there. The jet boat must have had a radio. While Drew and the Drunks talked to the sheriff, I went on ahead and found a place to camp. They caught up later.
The next morning we stopped at Galice, where my van was parked awaiting shuttle, and I replenished some of our food box supplies. Drew and the Drunks, after phoning their attorney in Portland to deal with their little legal problem, replenished their beer supply. Before we left Portland, they loaded 14 cases of beer into my van, and had begun consuming it right away. We stopped at every rest area along I-5—and made a few stops where there weren’t any rest areas. At Galice, fearing that their supply wasn’t adequate, they bought 8 more cases. That made a total of 528 cans of beer for three guys—about 30 beers a day, per person.
Drew had a radio along, and he soon realized that the only station he could receive was the Grants Pass station, which was doing play by play coverage of Little League baseball games. Drew and the Drunks made cash bets on all of the games, betting on what each individual batter would do, what the next pitch would be, and anything else that occurred to them. Over a couple of days a lot of money changed hands, but probably everyone broke even.
They bet on everything. I spotted a blue heron and bet five bucks that it would fly downstream when it took off. I bet only on sure things. When we stopped to pick up our permit, the ranger told us that there had been a drowning at Blossom Bar, and the recovery operation was intermittently blocking the river. We were told to be sure to check before going into the rapid. By this time, the radio had mercifully crapped out, so the guys made bets on whether or not the body would still be in the water when we got there. It wasn’t, but in the meantime a drift boat had become lodged in the row of rocks called “the Picket Fence” at Blossom Bar.
A salvage team was out on the rocks attempting to recover the boat. They had carried extension ladders from Paradise Lodge to use as bridges to get out near the boat, and were attempting to snare it with a grappling hook. I still have a picture of that on the wall.
Posted by The Mogur of Whitewater at 12:46 PM