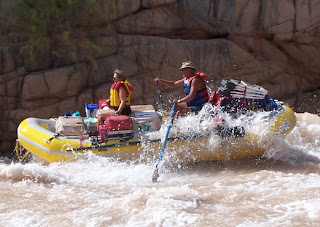 Insanity is a peculiar thing. Given the right circumstances, it can justify or excuse nearly any human activity. Yes, sometimes even murder.

There are many kinds of insanity, including some that are permanent and some that are conveniently temporary. (It is the latter type that is commonly associated with homicide.)

But the form of insanity that I’m talking about here is one of the permanent ones: Hobbies. Make no mistake: Hobbies are a form of insanity, and as such anything that a person does in the pursuit of a hobby is justifiable on the grounds of insanity. Only an insane person would spend ten thousand dollars for a postage stamp—and then not even use it; and I’m not even going to talk about golf! But once you acknowledge the insanity of it, your aberrant behavior will be accepted by society, in much the same way that we accept an occasional ax murderer, like that nutty Lizzie Borden.

“Four thousand dollars for a raft,” people say to me, “You must be crazy!”

I just smile. They understand. If I want to go out in January, for instance, and throw my body into a life-and-death struggle with the icy green waters of the Clackamas River as it beats its way through such places as Powerhouse Rapid, the Toilet Bowl and Carter Bridge Falls, then it is only natural that I would want to spend a few thousand dollars in order to do it with style.

So you see, for me rafting is a serious hobby—insanity in its purist form. Incurable. But it wasn’t always that way. It started out innocently enough: high school kids in wetsuits and inner tubes floating the Spokane River somewhere around the Idaho State line. Then about 12 years later the disease moved into its second stage.

For about $150 (double that in today’s money) I bought a yellow 6-man raft, which actually holds no more than four, some oars and a homemade plywood rowing frame. And of course, life jackets. You know what they are: those orange devices that you toss into the bottom of the raft and forget about until you find yourself dancing around on the river bed, looking up at foaming water that contains way too much air to provide buoyancy, but not nearly enough to breathe.

Most people survive that baptism (I call it “beginner’s stupidity”) gasping and sputtering, dazed by the loss of their beer and Doritos—and usually the life jackets, which stayed on the surface and drifted half a mile downstream by the time the survivors crawled to shore. This is a critical moment.

Many people get cured at this point. I don’t know in medical terms how it happens, but there are too many documented cases to ignore. The waterlogged survivors just hang up their oars (unless they floated downstream with the life jackets) and are never crazy enough to do that again.

The rest are lost. They—and I am one of them—rush right out and buy new life jackets. Real ones that now cost about a hundred bucks apiece, rather than those $4.95 things from K-Mart that would either slip clear off or else get maliciously tangled with your arms (thereby making it impossible to swim) in the off-chance that you happened to be wearing one at the moment you got dumped into the river.

Remember that. It’s a key symptom. When you catch yourself buying a life jacket that could actually save your life if it had to, you may safely assume that (1) sooner or later, it probably will have to; and (2) you are permanently hooked on the hobby, which is to say, insane.

It’s best, I think, to notify all of your friends of this fact as soon as possible. In fact, even if it hasn’t happened yet, I recommend having a formal letter explaining your insanity drafted in advance and put into the hands of an attorney. It should be marked “to be opened in the event of my spending ninety bucks on a life jacket.” That way everybody will understand about your hobby (insanity) and forgive, or at least tolerate, all of your future aberrant behavior.

That behavior will include (I speak from personal experience) taking that same yellow 6-man raft, a friend or loved one, maybe a dog, a minimal amount of camping equipment packed in waterproof bags that aren’t, and three day’s worth of food on a five-day trip down a wild and unknown stretch of river through utter wilderness where your only chance of replenishing your supplies lies in the feeble hope that you may snare a wild rabbit. More likely, you’ll be able to catch a lizard or two. That’s when you’ll be happy you brought the dog. He will be considerably less happy.

Later on, with the encouragement of the Humane Society, you will resolve always to carry enough food to last you the length of your trip. A novel idea. It means buying a bigger raft, however, because that old yellow raft just can’t carry any more than two or three days worth for two people.

At that point you become a genuine Rafter. You will spend something like $2,000 or $3,000 for a good raft (and you certainly don’t want one that isn’t good!) big enough to carry everything you need. Then your entire life will be structured around Saturday adventures on the McKenzie, Deschutes, North Santiam or Clackamas, and every year two or three Expeditions.

Expeditions will take you to places like “The River of No Return” or “Hell’s Canyon” on trips that will last a week or maybe two. And when you come back from an expedition you will spend your next couple of weeks back at work, wondering why you came back. But you know the answer. Deep down inside. You came back here so you can earn some money so that you can afford to go back there and maybe stay longer next time.
Posted by The Mogur of Whitewater at 12:53 PM