How I Became a World Famous Rafter 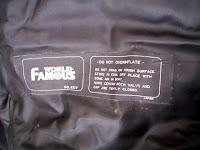 Six months later, in the middle of the winter, Cal Watson, a guy in my office, offered to sell me his raft. Later to become known as Mariah, it is a black 14-foot World Famous “12-man” raft—a Japanese copy of the military 10-man assault raft. Bingham-Willamette had bought a truck load of these to install as life rafts on a ship they were refitting. But as soon as the union thugs found out that the rafts were Japanese-made, they refused to touch them and threatened to walk out on strike. So the company bought new union-made rafts (at ten times the price) and then offered the World Famous rafts to employees at cost.

Cal had bought one for $300 to use as a fishing boat that he could carry in the trunk of his car. He used it once. It took two people a full hour to pump it up using two cheapie hand pumps, and then it turned out to be almost impossible to control as the breeze blew him all over the lake. I told him that I couldn’t pay him what the raft was worth, but he kept badgering me to tell him what I could pay. Afraid of insulting him, I finally offered $100. Amazingly, he took it. Our plan was to go back to the Rogue River the next summer, giving me half a year to design and build a raft frame.
Posted by The Mogur of Whitewater at 12:48 PM