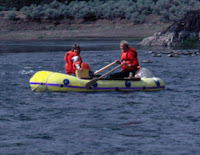 Well, we were through with rented rafts. We went out and bought our own yellow 6-man raft, which came with instructions for building a simple four-board frame for rowing, instead of paddling. I started planning our first Rogue River trip, using an article from the outdoor section of the Sunday paper as a guide. With a plethora of other projects to occupy my time, I didn’t get the raft frame done until two weeks before our scheduled vacation.

About that time, my sister Jan and her husband Chris came for a visit, and we took them on our raft’s maiden voyage on the Sandy River—my first time with an oar raft. It was a fun, uneventful trip, although my oarlock blocks split. Lesson learned: you have to pay attention to which way the grain runs in the wood.
A week later, my wife and I took the raft, with new oarlock blocks, out for our first trip on the North Santiam. Here again, I was using a newspaper article as a guide. At the time, the newspaper was doing a whole series of articles covering all of the rivers in Oregon. Eventually, they were compiled and published as a book, thus institutionalizing the shortcomings of the individual articles.
The article covered the section of river from Packsaddle Park to Stayton, so Stayton was where we parked our shuttle car. Then we headed boldly down river. We did fine all the way to Mill City. Even Spencers Hole, which I now know flips rafts regularly, was no problem. We had scouted Mill City Falls from the bridge on our way to the put-in, and I knew where to run it. But as I approached it on the water, the chute looked steeper than I had expected. It was slack water, so I started ferrying across the river toward the right, looking for a better chute. I was on my way back to the left when the current grabbed the raft and sucked us right over the tallest part of the falls. No life jackets on—and this time, no wetsuits either. That’s where we got to learn the power of a reversal. And the river really wasn’t running very strong that day. We both came up sputtering, with a new appreciation for life jackets. I went to Andy & Bax and got a pair of those big, bulky Type I jackets for our Rogue trip—and we actually wore them.
We finished our Santiam trip at Mehama. By the time we got there, it had already taken more time than our newspaper article had logged for the full distance all the way to Stayton. And a fisherman told me that it was about the same distance from Mehama to Stayton as from Packsaddle Park to Mehama. At that rate, it would be 10:00 PM by the time we got to Stayton. So I hitched a ride to Stayton to get our shuttle car, and I still haven’t made the rest of the run.
Posted by The Mogur of Whitewater at 12:50 PM