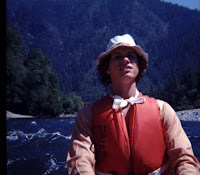 By then, despite our little misadventure on the Sandy, we were thinking that this rafting thing was pretty easy, so in April when my brother Jerry—who was in the Air Force, stationed at Belleville Illinois—came visiting, my wife and I decided to take him rafting. We rented a raft that was supposed to be a six-man but turned out to be a four-man. Oh well, we thought, there were only three of us, so it would be okay. We headed up to the Upper Clackamas with our wetsuits. We launched upstream from where Drew had taken us, so we were on unfamiliar water, other than what we had seen from the road. We did fine for the first half-hour, but then as we were approaching the Toilet Bowl, half of the raft suddenly deflated.

The paddles that we were using had riveted aluminum blades, and as we studied them after the event, we noted that one of the paddles had a loose rivet that made a sharp raft ripper. That is probably what ripped the raft open—about a three inch tear. In any case, we convinced the rental company that it happened that way, so they didn’t charge us for the damage. As soon as the raft lost air, we were dumped into the river. We swam the raft carcass to shore, just above the main drop into the Toilet Bowl, not fully appreciating what would have happened if we had been pulled into that.
Posted by The Mogur of Whitewater at 12:51 PM